The Ups and Downs of dimming LED’s

The Ups and Downs of dimming LED’s

LED lighting is a new technology that gained market acceptance in a very short period of time,  probably only paralleled by the mobile computing industry.  Initial teething problems can thus be expected with such rapidly evolving technology. However, unlike the tablet and smartphone industry where a simple software update usually addresses most of the problems, the LED industry is not yet that fortunate.  The hardware nature of LED lighting and auxiliary controls such as dimmers do not allow for on-site configuration.  The user or installer must thus have prior knowledge that the combination of, for instance, LED’s and dimmers, will be compatible before installation to avoid costly revisits to the site.

Dimmer and LED manufacturers and suppliers often encounter questions such as: which is better, leading or trailing edge dimmers, which dimmer will work with my LED and how many LED’s can I dim with one dimmer?  These pertinent questions, unfortunately, do not have simple answers.

Generally speaking, leading (aka “Triac dimmers”) and trailing edge (aka “electronic dimmers”) phase-cut bell-press and rotary dimmers work equally well with resistive loads (230VAC halogen, 12V halogen with electronic transformers and incandescent lamps).  Oscillograms 1 and 2 show the measured voltage (red waveform) and current (yellow) of a 50W halogen lamp with a leading edge and trailing edge dimmer respectively.  Part of the sinusoidal AC mains waveform is “cut off” by the dimmer during conventional phase-cut dimming.  Leading edge dimming can thus be identified by the “blanking period” (the white dashed line) of the AC cycle which leads the voltage supplied to the load.  Likewise, the trailing edge is identified by the “blanking period” which trails the voltage supplied to the load.

A number of leading edge dimmers, however, require a minimum load of typically 10% of the dimmer rating which makes it incompatible with a small number of LED’s per dimmer, resulting in the dimmer not turning on or severe LED flicker.  Oscillogram 3 shows the measured LED voltage (red) and current (yellow) of a GU10 LED lamp being dimmed with a leading edge dimmer.  Even to an untrained eye, it is obvious that the wave shapes are far from ideal – there are current spikes, the voltage and current are unsymmetrical etc. and severe flickering occurs.  Comparing the same LED waveforms with a trailing edge dimmer in Oscillogram 4, it can easily be seen that the wave shapes are “clean” and symmetrical and the LED dims perfectly without a flicker!

However, if the dimmer turns on and the LED’s dim without flicker, it does not imply good compatibility.   Oscillogram 5 shows an example of a 9W LED being dimmed with a leading edge dimmer.  The single LED has an inrush current spike of 1.2 Amps every mains half cycle (100 times a second).  Although the inrush occurs for only a short period of time, it could be damaging to the LED as well as the dimmer if a number of LED’s are placed on a single dimmer.  In this instance, the LED and dimmer are much more comfortable with trailing edge dimming as can be seen from Oscillogram 6 which shows that the current waveform is completely void of current spikes – obviously less stressful to the electronics inside the LED.   This example shows why a number of dimmer and LED manufacturers recommend a typical “derating” to 10% of the dimmer rating for LED’s (hence if a 600W rated dimmer is being used for LED’s, a maximum of only 60W of LED’s can be dimmed)

To complicate matters further: should the LED dim well and current waveform be acceptable with a particular dimmer, the startup or turn on “instance” plays a role as well. Oscillogram 7 shows the waveforms of a LED which dims well with a leading edge dimmer and the steady state current is good when the LED is on, but during startup, there is a current pulse of 2.2 Amp into the single 5W GU10 lamp!  The same LED on a trailing edge dimmer in Oscillogram 8 shows a very controlled startup which is obviously safer for the LED and dimmer.

The examples shown should however not be generalised: there are LED’s which exhibit exactly the opposite: hence higher current pulses etc. with trailing edge dimmers than with leading edge dimmers – it all depends on the design of LED driver (internal or external).  It must also be emphasised that although it is always better to stress electronic components as little as possible to ensure optimum product lifetime, the high current pulses shown does not implicitly imply poor LED and dimmer compatibility.  The only real way to be sure of compatibility before installation is to request a list of approved dimmers, dimmer types and maximum load per dimmer from the LED or dimmer manufacturers – an example of such a list can be found on Shuttle Lighting’s home page. 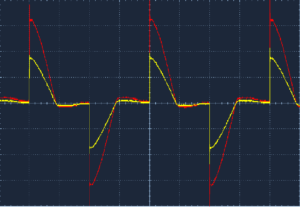 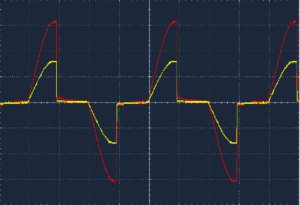 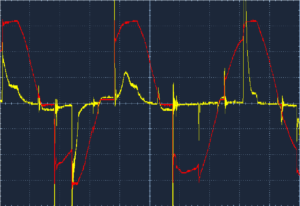 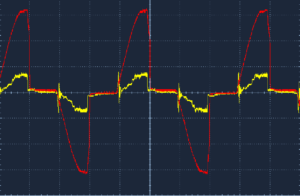 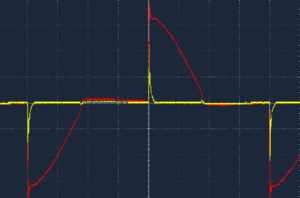 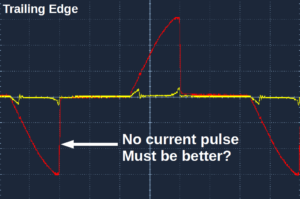 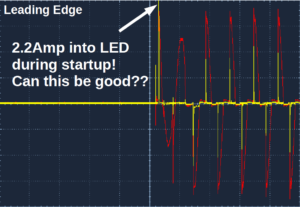 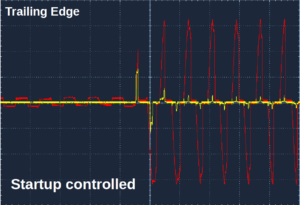