UPS and inverter backup units can be classified into two main categories, true sine wave and “quasi” or “simulated” sine output and are usually specified by their VA and Watt rating.

Oscillogram 1 shows the voltage (red) and load current (yellow) of typical 600VA “quasi-sine” UPS with 10x Verbatim 8.5W GU10 LED’s (#52310) without a dimmer – notice the 360V peak voltage produced by the UPS!  The discontinuous voltage output of the UPS causes severe lamp instability when operated with a typical leading edge dimmer, shown in Oscillogram 2 and such UPS systems should thus be avoided when dimming LED’s.

Problems can, however, be experienced when dimming LED’s operating from a pure sine UPS due to an obscure parameter is known as the load Crest Factor (CF).  The CF which is typically rated at 3:1 for most UPS and inverter units, is the ratio of load peak current to the RMS current.  Illustration 1, for instance, shows two loads which consume exactly the same power and have the same RMS current, but the blue waveform has a CF of 1.414 (pure resistive load) and the red waveform’s CF is 4.24.  The large peak current of the high crest factor in the example clearly shows that “more current” is required from the UPS than for the blue waveform, which requires an associated de-rating of the UPS.

To demonstrate this phenomenon, a professional double conversion true sine wave 2000VA/1800W UPS was employed to power the 10 Verbatim LED’s.  The UPS has a load CF rating of 3:1 and is capable of delivering 8.7 Amp RMS with a unity power factor load (thus CF of 1.414).  The peak current available is thus 12.3 Amp and taking the crest factor into account, the UPS can deliver a maximum current of 26 Amp (obviously with reduced load wattage).  Oscillogram 3 shows the measured load voltage and current when the LED’s are dimmed with a trailing edge dimmer.  The lamp peak current is approximately 0.5A resulting in a maximum CF of 2.22 and the lamps have stable dimming performance.

When employing a classical triac based leading edge dimmer with the same UPS and lamps, the results change drastically: severe lamp flicker occurs with 85W of LED lamps on a 2000VA UPS!   Oscillogram 4 reveals the origin of the flicker: the dimmer turns on, but then the voltage from the UPS falls away and starts up again.  The lamp peak current is approximately 13.2A resulting in a maximum CF of 11.8 (notice the difference in current scales between Oscillograms 3 and 4).  The UPS is thus unable to sustain the large peak current although it is well within the specification of the particular model.  The reason for this is due to the very sharp load current rise time of approximately 130 000 Amp per second which exceeds the maximum load current rise time of approximately 120 kA/s for the particular model. Above this limit, the UPS is unable to sustain stable output voltage.

The choice of UPS, dimmer and LED model thus directly impacts the maximum rating of the UPS, while the dimensioning of a UPS backup for LED’s, especially with leading edge dimmers, must not only take the maximum crest factor into account but also the current rise time. 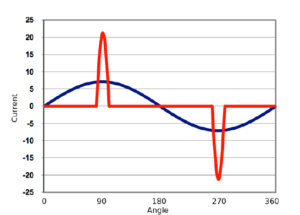 Illustration 1: These two waveforms both have an RMS current of 5 A, but their crest factors are very different.(Source: Ametek) 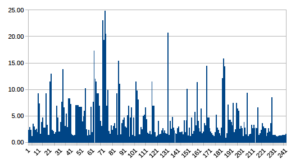 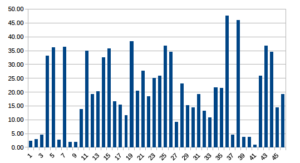 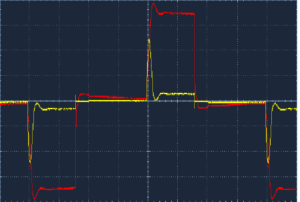 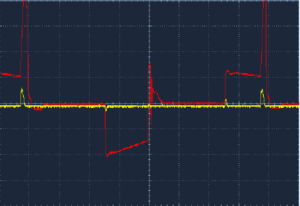 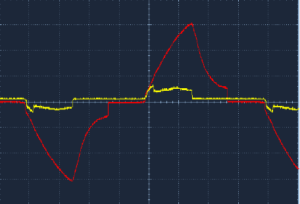 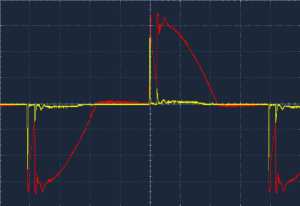